This new targeted fund is to support Bruce Grey wide welcoming initiatives for newcomers both to the community and those new to Canada.

Bruce and Grey Counties are expecting a significant influx of newcomers to our community and we need to ensure the resources and community agencies are able to support these new residents. 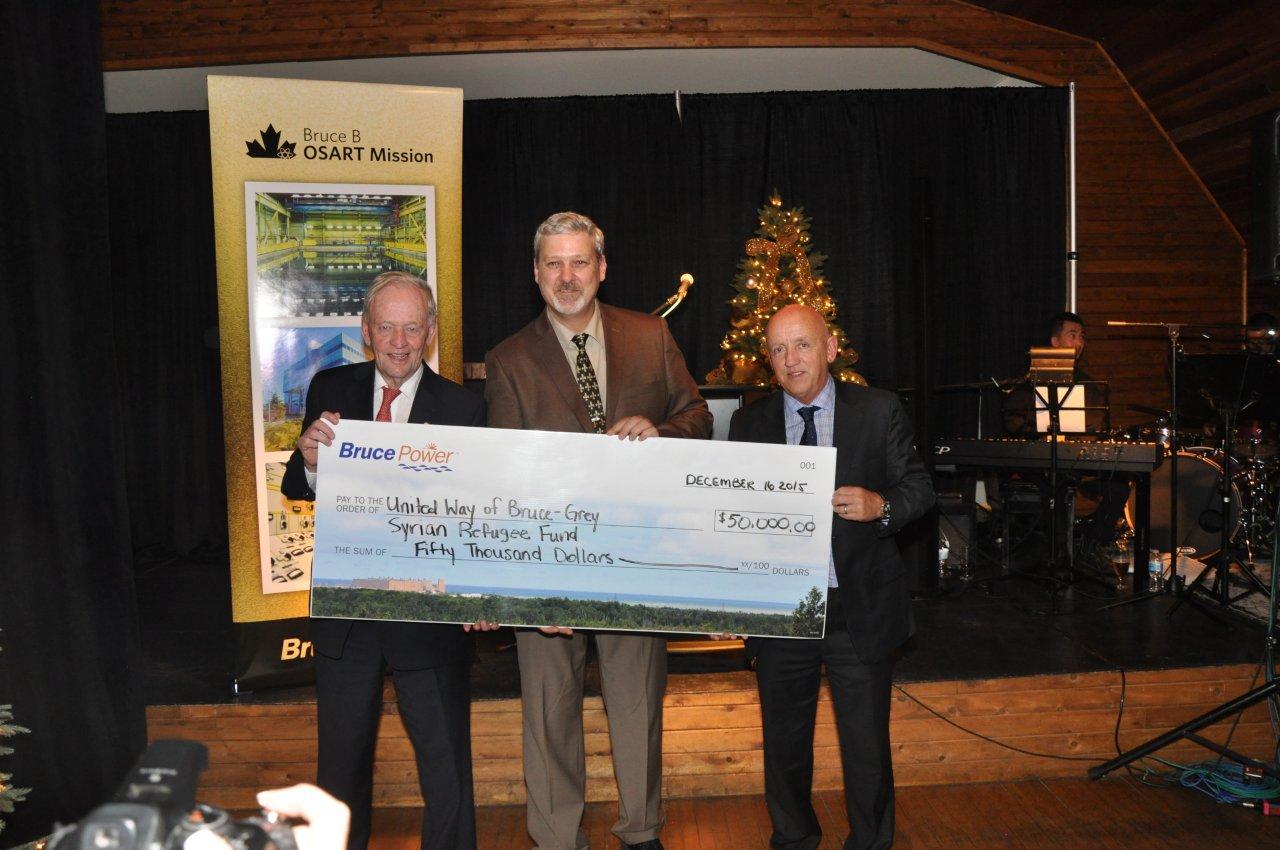 December 17, 2015 – Bruce Power and the United Way of Bruce-Grey are teaming up to create a fund to support the expected influx of Syrian refugees and other newcomers to the region.

Bruce Power will donate $50,000 to kick-start the fund and the United Way of Bruce-Grey will administer it and is contributing $10,000 of in-kind support to the initiative.

“We applaud the many local initiatives to help bring families to the area in order to give them a better life,” said James Scongack, Vice President of Corporate Affairs at Bruce Power. “This new fund is Bruce Power’s way of offering assistance to the grassroots campaigns already underway in so many caring communities throughout the area.”

Bruce and Grey Counties are expecting a significant influx of newcomers according to Francesca Dobbyn, Executive Director of the United Way of Bruce-Grey.

“This new targeted fund will support welcoming initiatives for newcomers both to Bruce-Grey and those new to Canada,” Dobbyn said. We need to ensure the resources and community agencies are in place to support these new residents.”

Millions of Syrians have been displaced due to conflict in their home country and the Government of Canada is working with Canadians, including private sponsors, non-governmental organizations, provincial, territorial and municipal governments to welcome 25,000 Syrian refugees. Approximately 1,000 refugees have arrived in the country since early November.

Bruce Power operates the world’s largest operating nuclear generating facility and is the source of roughly 30 per cent of Ontario’s electricity. The company’s site in Tiverton, Ontario is home to eight CANDU reactors, each one capable of generating enough low-cost, reliable, safe and clean electricity to meet the annual needs of a city the size of Hamilton. Formed in 2001, Bruce Power is an all-Canadian partnership among Borealis Infrastructure Management (a division of the Ontario Municipal Employees Retirement System), TransCanada, the Power Workers’ Union and the Society of Energy Professionals. A majority of Bruce Power’s employees are also owners in the business.

Labour, Business, Faith and Community Group Statement in Support of Syrian Refugees
The Syrian refugee crisis has left more than four million people desperately
seeking safety. It is a humanitarian crisis of monumental proportions, one
which Canada has a responsibility to act on as quickly as possible.
We are representatives of Canadian unions, businesses, community and faith
groups, united to welcome 25,000 Syrian refugees to Canada and committed to
playing a role in supporting their resettlement.
Together our organizations are sharing information nationally to best meet the
areas of greatest need. We have also made it a priority to coordinate our local
chapters and members to work together to support refugees at the community
level.
We believe our country can support 25,000 people in need to build new lives,
free of conflict. It’s the right thing to do, and the least we can do as a country.
Canada is a compassionate, caring nation with a long tradition of embracing
diversity and showing humanitarian leadership. We must continue this
tradition and demonstrate these values and principles in our approach to this
crisis.
We are also excited about the possibilities for integrating refugees into our local
economies. Canada has a history of welcoming refugees who have contributed
to our economy, started businesses and created new jobs.
We recognize the importance of addressing the real short-term and ongoing
needs of refugees as they settle and begin their lives as new Canadians. By
working together – business, unions, faith and community groups – we can
meet the incredible need that exists.

This fund is not to support the sponsorship of and the direct efforts of supporting refugees, it is to support the work of the various community committees who are doing the front line support of newcomers and refugees.

All funds exceeding established activities will be held for anti-discrimination and welcoming activities throughout the two counties.